Learn about New Jersey’s role in Repatriation of Native American Remains and Artifacts. 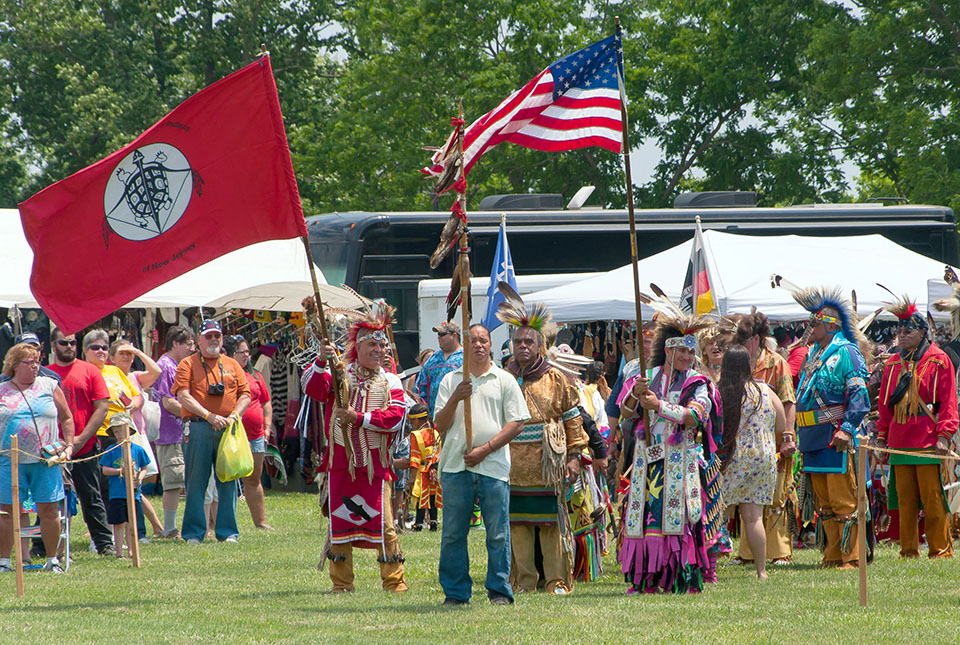 In 2014, Patricia A. Martinelli was showing her new intern around when she discovered the skulls. Martinelli is the curator of the Vineland Historical and Antiquarian Society museum, a two-story building made of red brick right off Elmer Street in the heart of Vineland. You could almost mistake it for an old schoolhouse, but it is in fact the “oldest purpose-built museum in the state,” according to the Society’s website. 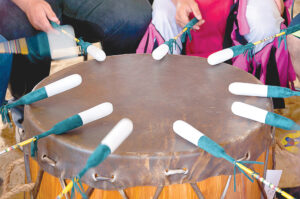 For 10 years, Martinelli has overseen the Society’s exhibits of glassware, photographs, artwork, Civil War memorabilia, and Native American artifacts that serve as part of the society’s mission to collect and preserve Vineland and South Jersey history.

On this particular day, Martinelli pulled out a box in the far back of their medical section cabinet. Inside were two human skulls and some bone fragments, not an uncommon sight for the Society’s collection. In the jostling of being taken out of the cabinet, a tag fell out. Martinelli plucked the tag from the floor. It read, “From the Battle of Bear Paw Mountain.”

Over 140 years ago, across the continent, the Nez Perce Tribe had been forced out of their reservation because of gold-seeking settlers. The removal sparked a series of violent encounters between the Nez Perce and the U.S. Cavalry, causing the tribe to flee for over a thousand miles to reach refuge in Canada. Most of them never made it. In the grassy plains of northern Montana, Chief Joseph and 750 members of the Nez Perce tribe clashed for the final time with the U.S. Cavalry in 1877 at the Battle of Bearpaw Mountain. After five days of fighting, Chief Joseph’s warriors were injured and tired. Families were starving and had no blankets to protect them from the cold. Chief Joseph surrendered. More than 400 Nez Perce tribe members became prisoners of war, including men, women, and children. 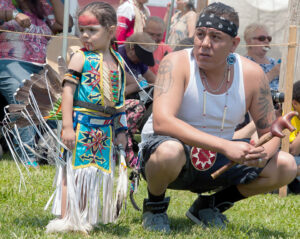 The remains of three of those people wound up sitting in a dusty box on a shelf, tucked away in a Cumberland County museum, were very far away from home. Martinelli had to ask herself, “What do I do next?”

Museum staff, archeologists, private collectors, and even average individuals who find old boxes in the attic are faced with the question of what to do with Native American artifacts and remains everyday across New Jersey. We often forget that New Jersey was home to Native American tribes like the Lenni-Lenape and Nanticoke for over 10,000 years before Europeans arrived. Their legacy remains written in the land. Martinelli estimates that her facility has roughly 8,000 to 10,000 Native American artifacts. Cape May is a popular tourist spot for finding arrowheads. In 2015, 7,400 artifacts alone were discovered in Camden during a development project. But where do these items and remains belong? The issue of repatriation, or the return of items to their culture of origin, is a national debate. Should all artifacts be given to institutions for study or should they be returned to the State and Federally recognized Native American tribes not only in New Jersey and Delaware, but across the nation? 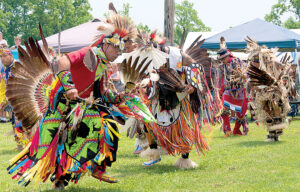 “If they are what I think they are,” Martinelli realized, “then they need to go home.” She reached out to Maria A. Rosado, Ph.D., and Jane A. Hill, Ph.D., the directors of the Museum of Anthropology at Rowan University (MARU). Dr. Hill and Dr. Rosado noticed the skulls had a shovel incisor. On their two front top and bottom teeth, there was a dip in the surface, resembling the blade of a shovel. This trait and other markers like the size of their eye sockets confirmed to the MARU directors that the remains were Native American. The largest skull belonged to a man in his 50s and the smaller skull to a woman in her 30s. The dental development of the bone fragments indicated they belonged to a 4-year-old girl.

“I have to give credit to Patt for reaching out,” Dr. Hill said, “because most people won’t.” 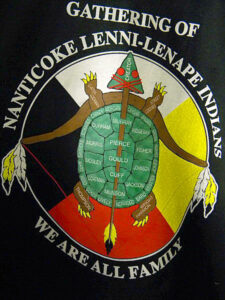 Martinelli and the Vineland Historical and Antiquarian Society were not legally obligated to do anything with the remains. The federal law that governs the return of Native American artifacts is the Native American Graves Protection and Repatriation Act, often called NAGPRA, passed in 1990. Under NAGPRA, federally recognized tribes have the right to reclaim all artifacts related to burials, such as human remains, funeral objects, sacred objects, and items of cultural importance. However, NAGPRA only applies to institutions that receive federal funding.

NAGPRA not only gives tribes the right in claiming any previously excavated sacred objects currently in institutions, but anthropologists must receive approval from the local tribes before starting new archaeology excavations or research on remains. One such scholar is Dustin Cushman, an instructor of anthropology at Rowan University who specializes in the burial rituals of the Native people of the Delaware Valley. His research centered on re-examining all of the Native American burial sites in the Delaware Valley area from 700 AD through European contact to the 1730s.

For Cushman, the tribes of Delaware decided that he could not perform any destructive testing like chemical analysis and carbon dating, leaving visual examinations, measurements and photographs to work with. While being limited can frustrate researchers, archaeologists are legally obligated to respect the wishes of the tribes to which these people and artifacts belong. If a tribe says no to all archeological research, then those remains are returned and buried. End of story. 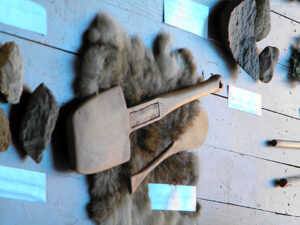 In Cushman’s case, the Nanticoke people of Delaware and those previously forced west to Oklahoma were very supportive of his research. Many tribes who were displaced from their homeland, like the Lenni-Lenape and Nanticoke, know little about their ancient traditions. Through his research, Cushman was able to offer alternative interpretations to long standing assumption that grave goods were hoards to mark wealth.

“People came to the funeral and gave a string of beads or a pipe,” Cushman explains. “These were placed in the grave as a bond between the people who were still alive and the dead person. The Delaware have always had rituals that connected individuals and families to one another, the groups to one another. Burial rites served as a way to maintain these connections.”

On the Jersey side of the bay, the Nanticoke Lenni-Lenape Tribal Nation based in Bridgeton, have also reclaimed their past through research. As a state-recognized tribe, they cannot receive remains and artifacts from the federally funded institutions that follow NAGPRA, but they regularly receive artifacts from individuals and other organizations. Dr. John Norwood, tribal council member and tribal historian, has worked with countless museums, historical societies, individuals, and archeologists on repatriations or research. He’s worked with one archeologist, Dr. Cara Blume, for 30 years.

“She’s been able to tell the story of our people going back centuries, millennia,” Dr. Norwood explains. Notably, Dr. Blume has helped uncover the lost craft of glass knapping, the shaping of tools and ornaments, like arrowheads, out of shards of broken glass. “We were the first recyclers,” Dr. Norwood likes to joke. Today, tribal members practice glass knapping once again.

The tribe and Dr. Norwood have also contributed to the work of academics and intuitions by consulting on excavations, exhibits, and museum practices.

“We can say what was said, who was there, how this was used, perhaps someone’s grandmother used something similar,” Norwood says. “Having that interaction with the tribe can make the museum or historical societies utilization of those items in their educational endeavors be much richer and fuller.”

The Nanticoke Lenni-Lenape Tribal Nation plans to open its own museum to the public in 2020. The museum will feature ancient artifacts of their people and newly-produced crafts and artwork. Twenty-three acres has been set aside for an interactive Lenape village and to host events like family-styled pow-wows.

Some might wonder why remains of those that lived centuries ago matter. To that, Dr. Norwood tells people, “Let me go to any graveyard and dig up your grandma, take her out of the coffin and start passing her hand around. How would you feel?”

For the Nanticoke and Lenni-Lenape people, they experience time as a culture differently. Elders will speak of events that may have happened more than a 100 years ago as if it happened only recently.

“The connection to ancestors, it’s not just folks on a census record or a name on a tombstone,” Dr. Norwood describes, “there is a direct, very close feeling of connection to those that have gone on and disrespecting them is something we take very personally.”

“[The Historical Society has] always tried to respect different cultures because Vineland has always been an immigrant community. You have a diversity of groups living here and to me that means everyone gets accorded the same degree of respect,” Martinelli says.

Dealing with the aftermath of hundreds of years of persecution and archeological negligence is the job of Robert Taylor, the NAGPRA specialist within the cultural resources division of the Nez Perce Tribe. Taylor lives in Idaho, where the Nez Perce Indian Reservation is located. The tribe’s original homeland once spanned 17 million acres across Idaho, Oregon, Washington, and Montana. Today the reservation is 750,000 acres and there are 3,500 tribal members. Taylor primarily oversees reburials of remains returned through NAGPRA. When he received an email from Martinelli in Vineland, he made arrangements to fly out to New Jersey and collect the remains. He brought them back to Bear Paw Mountain where he reburied them. In the Nez Perce tradition, as is common in many Native American cultures, it is paramount that remains be returned to their original burial site, or as close as they can guess.

“We believe that eternal rest is granted on to thee and if for some reason, eternal rest has been disturbed when the remains have been taken. When people remove remains or remove arrowheads, they are taking away our footprint on the land,” Taylor explains. “There was a promise made at the beginning of time here amongst our people that the Earth would take care of the remains and we would become part of the earth again. When the remains are removed from the Earth, that promise is broken and it’s our responsibility to hold up to that promise. So we go back.”

Even with the man, woman, and child from Vineland now resting beneath the Montana plains along with their fellow tribal members resting in the mass graves where the US soldiers left them, Taylor’s work is not done. He says there’s been an increase in returned remains in the past two years.

“Many times when people are settling their parents, their grandparents’ estate, they find remains,” Taylor says, “and they freely give them back to us, so we can attend to them. They don’t care what we do with them because they don’t want them or they think it’s right, it’s our property.”

He asked me how the weather is out here on the East coast, when we spoke in the fall of 2018, as he was flying out soon to Washington DC to collect the beads of Old Chief Joseph, father of Young Chief Joseph who surrendered at Battle of Bear Paw, from the Smithsonian. His grave had been moved in 1926, ironically, due to grave robbing. During the move, an archeologist took seven beads. He even wrote a note saying, “I got these beads from Old Chief Joseph’s grave,” but the beads were exchanged twice after the archeologist’s death before reaching the Smithsonian.

Taylor returned the beads to Old Chief Joseph’s grave the following spring, 93 years later. Even with the return of the beads, he won’t be completely at rest.

“Old Chief Joseph has been sitting in his grave without his skull and we don’t know where his skull is,” Taylor says. “They said years ago in Baker’s City there was a dentist and on the shelf on the wall he had Old Chief Joseph’s skull.”